In October 1961, Esso Bowling Club sent a letter to local New Forest bowling clubs suggesting a league between the ladies of those clubs.

Esso, Lymington, New Milton, Milford-on-Sea and Ringwood said that they were in favour of this idea.

An inaugural meeting was held at the Community Centre, Lymington on Friday, 16th November, 1961.  Mrs Churchill of Esso took the chair.

On 11th February, 1962, the Association was formed and a draw was made for the rotation of President.  The order at this time was: Lymington; New Milton; Esso and Milford-on-Sea although New Milton withdrew after playing for one year.  The first fixture was played against the men on 26th May, 1962.

Mr. T. P. Churchill of Esso gave the trophy in 1962.  It was used until 1985 when it was housed at Esso for safe keeping.  It was returned to the Association in 1966 for further use.  A Champion versus the rest match was played early in 1963.  In 1966 Mrs Churchill was made a Life Vice President.  In 1967 Green Hatbands were introduced.

The Competitions and Leagues 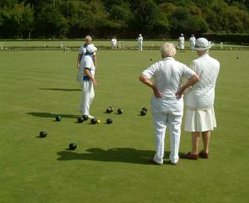 The first competition was created in 1977 when Gladys Eardley (Ringwood), donated a bowl for the Jubilee Triples.  34 played in 1980.

1990 Cox's Pairs was played at Esso for the first time as its permanent venue.

Still based at Holbury, is now known as Waterside Bowling Club.

1994 A Premier League was tried instead of the C League.

1995 The C League came back with the addition of the D League.

1996 The first Champion of Champions was played at Esso.

2002 The Club Championship competition was introduced.